Run For Your Prize

24th October marked the first day of the first mobility in the Erasmus+ project ‘Amazing Race’. Right the first day you could have seen friendships being formed between Spanish, Finnish, Lithuanian and Croatian students.

On Sunday 28th of October, the fifth day of the mobility, students and teachers headed west to the Trakošćan castle to win a race. In every mobility of the project, there will be a race. Although the teachers tried to scare the students by telling them that the race would be held no matter the weather conditions, the students didn’t mind it at all and were looking forward to it.

Luckily, it was a sunny and pretty warm that day so the students needn’t have worried. After a cheery drive to the Trakošćan, the students were welcomed by two police officers who were in charge of the race. The students were divided into eight groups and in each group, there were four students, each from one country. 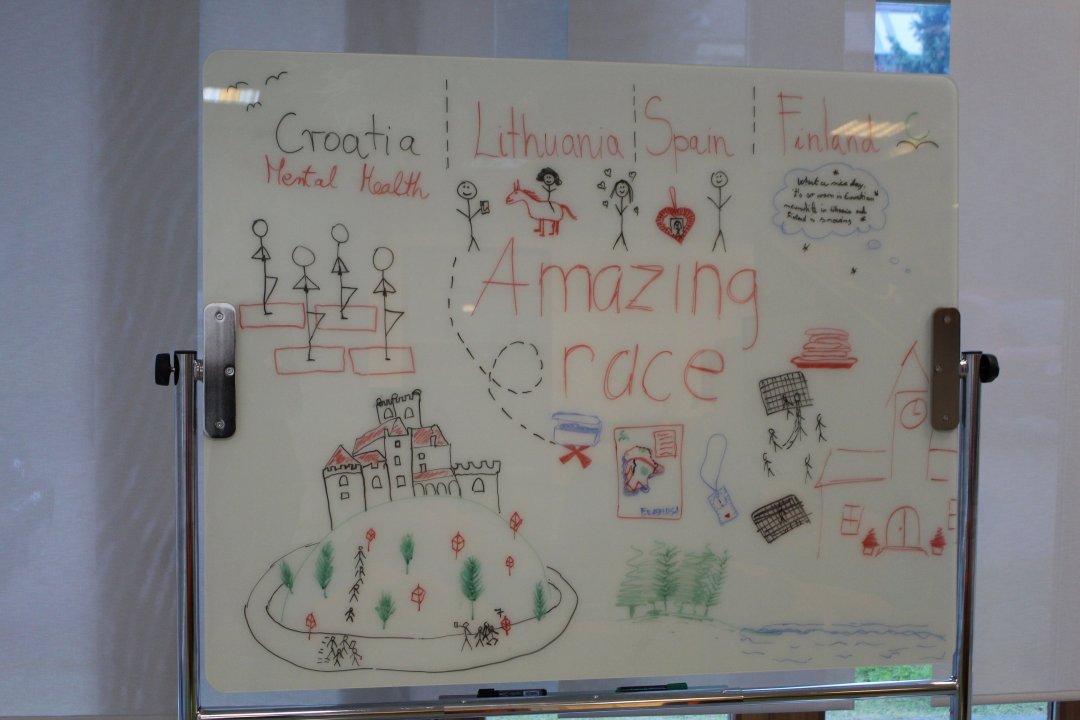 The race was orientational running around the Trakošćan lake. The path was 2.4 kilometers long with 10 stations and several workshops along the way. Each group got a compass and a map and had started 5 minutes apart, so they wouldn’t cross paths.
In the first workshop on station 3, each group had to solve a puzzle as fast as they could and keep running towards the finish. While running, the students were passing
by beautiful landscape and some were even taking pictures. The second workshop was on station 6 and it had a test about things which students might have learned
through the mobility.

The biggest problem for the teams was station 7 where it was said that a team had to take a selfie. About two-thirds of the teams forgot about the selfie, they kept running to the finish only to be sent back to station 7 to get a selfie. The teams were very frustrated but nevertheless, they went back for the selfie and finished the race.
Apart from the eight student teams, there were two additional teams, the teachers. The Croatian teachers formed the first team and the foreign teachers formed the
second. Unfortunately for them, they weren’t ‘in it to win it’, they were running just for fun and weren’t really a part of the official race. The winners of the race were awarded famous Croatian Dorina chocolates and weren’t disappointed.

After the race, and the award ceremony, the bus headed to the Martinčević country style family restaurant to feed the starving athletes. Apart from the amazing food, the students had loads of fun riding horses, playing games and just talking. When going home, students fell asleep in the bus and didn’t want to go to their homes.
The next day was also the last day of the mobility, and let me tell you the saddest day. Students said their last goodbyes to their new friends and host families. A lot of tears had been shed the last day because of the constant reminder that this might be the last time they see them in their lives.