When one thinks about media in the city of Trondheim – the third biggest city in Norway – the first thing that comes to mind is Adresseavisen. Locally known as Adressa, the 250 year old media firm has asserted itself in the Trondheim district becoming a fundamental news source for Trøndelag and Nordmøre.

As a part of the Erasmus+ project, English Through Entrepreneurship, students from Croatia, Turkey, Norway, Belgium and Romania – including the students contributing to this site – had the opportunity to visit the firm’s new offices and learn more about the functioning of the well-standing news agency. 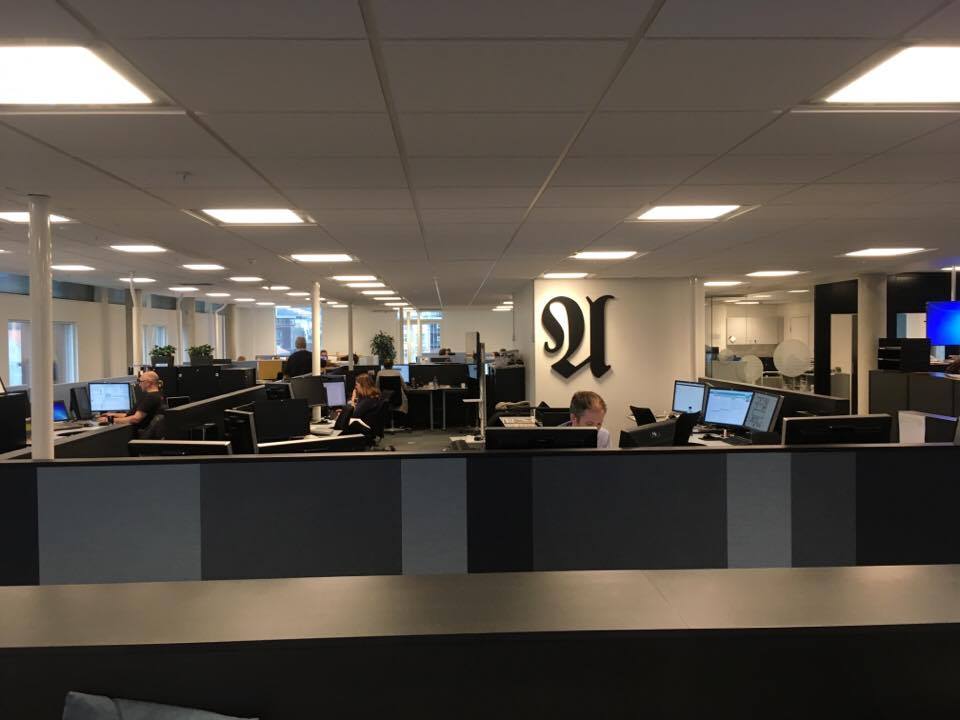 Despite the long history of Adressa, the agency gives off an air of modernity – not only when it comes to the architecture but also when it comes to the paper and website themselves. Adressa has frequently positioned itself as trailblazer, which is observable throughout its history. In 1967 it also became the first Norwegian newspaper to implement computer technology  and that aura of innovation is still visible today.

“The whole news agency had such an open and inviting atmosphere,” said Dora Grabar, a participant in the Erasmus+ project, “It was really interesting to see just how many departments a news agency consists of.”

The journalists of Adresseavisen were so accommodating they not only showed the Erasmus participants around their many departments in the modern-built property, yet also held a presentation on reporting crime and hard news. The presentation was held by two crime reporters Camilla Kilnes and Charlotte Sundberg and it focused on the main issues of creating a hard news story such as finding sources while maintaining the ethical code of journalists. The students were gratified to hear that insight into the tricks of the trade, which also served as a learning opportunity.

The trip to Adresseavisen truly gave an opportunity to learn about various business choices”It was interesting to learn that even though they publish all news on their website, they still print newspapers. In this way they can reach a wider audience, such as the elderlies,” said Sara Saraljic, another participant in the project. All in all the experience of visiting such a prestigious agency is something that definitely will not go amiss for these students.