If you are on at least one social media site, chances are you’ve come across a thing called ‘SKAM’, a modern Norwegian TV show. However, what makes the Norwegian TV show for teenagers such a world phenomenon?

One of the reasons why SKAM is so special and different from anything you’ve ever seen is because of its real-time format. The show’s premise is simple – you see things when they occur. Episodes that air on Fridays are a compilation of clips that are posted on NRK’s (the television company) website throughout the week. If something in the SKAM-universe happens on Monday at 9:07, the corresponding clip will be posted on Monday at 9:07. Nobody knows when a clip is going to land. Aside from clips, there’s another thing NRK takes advantage of – social media. All characters have their own Instagram and Facebook and posts that are made there, also take place in real-time. That’s what you get in-between clips, along with screenshots of text messages that give you the perception of snooping into the character’s private lives. 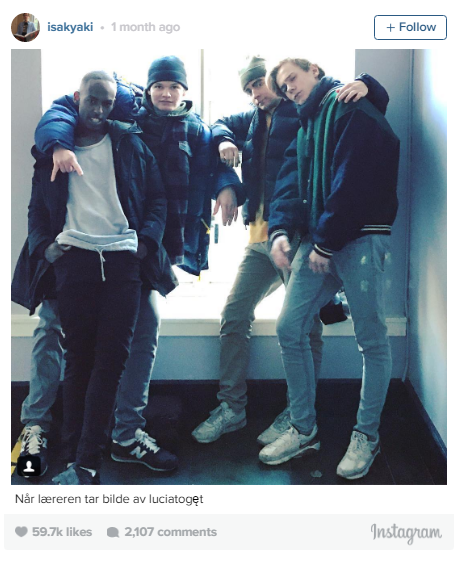 Usage of social media and real-time broadcasting aren’t the only things that make SKAM so unique. It’s in Norwegian and because of copyright laws on the music NRK has acquired, they are only allowed to show their content in Norway and hence there are no subtitles. However, people around the world want to watch it. That’s why some kind Norwegians add subtitles in English and do so after every clip mere hours after its release. It doesn’t matter if you are from the US, Belgium, Croatia or any other country where Norwegian isn’t spoken – we are all the united when we watch it with subtitles.

Controversies of the show

SKAM takes liberties in doing things that are unexpected for most TV shows of other countries and changing main characters every season is one of them. The first season’s main character is little more than a background character in season three. This allows the showrunner and writer, Julie Andem, to tackle different issues that aren’t Norway specific. It deals with racism, has a Muslim character speak up for herself and what she believes in, features gay characters, points out ignorance and talks openly about mental illness, amongst other things. I haven’t seen many shows that even mention half of these. SKAM does it and does it well.

Why should you watch it, then? First of all – it’s short. It’s got three seasons, thirty-five episodes in total and most of them are around twenty-five minutes long. It’s light hearted, it’s cute and hilarious, emotional and realistic and above all, it’s quality. You won’t regret it.